Go to content
Christ Church Heritage...
Founding of the Church...
The members and friends of the Church of England in Timperley felt for many years the need of a church nearer than the then Parish Church at Bowdon or the Chapel of Ease in Altrincham (St. George’s). In May 1847 a meeting was held which decided to inaugurate a movement for the building of a church and vicarage in Timperley and to take immediate steps to raise the necessary funds.
A Building Committee was formed and the money began to come in. A plot of land was given by Mr. J. Barratt and Mr. James Bayley of Altrincham was appointed architect for the project The foundation stone was laid on the 13th of November 1848. In anticipation of the approaching completion of the building a meeting of subscribers was held and the first Trustees of the Patronage were appointed.
These were:- The Revd. W. H. G. Mann (Vicar of Bowdon), James Barratt, Thomas William Tatton of Wythenshawe Hall, Benjamin Bagnall and John Skelton. Shortly afterwards, the Trustees appointed the Revd. Edward Dowling as the first incumbent. At the first Vestry Meeting Benjamin Bagnall and John Skelton, both living in Timperley, were elected Churchwardens.
The first service was held by Bishop’s Licence on the 20th September 1849 when the Churchwarden’s staves were carried for the first time. They are still in use today. Christ Church was consecrated on the 23rd October 1851 and the original Ecclesiastical District of Timperley was created and assigned as a separate parish under the name and title of Christ Church Timperley on the 7th May 1852.
The First Building...
Christ Church is unusual in being built aligned north to south and not east to west. So all the descriptions in this booklet will refer to the Liturgical, with the altar at the east end. The original building took the form of a simple rectangular chapel with a tower and spire at the west end. The church was designed in the Gothic revival style with a slate roof and built in red sandstone from Runcorn. The interior was extremely simple, with four regularly spaced oak beams supporting the roof and white-washed plastered walls. All the windows had plain diamond panes of glass. A balcony was placed at the west end of 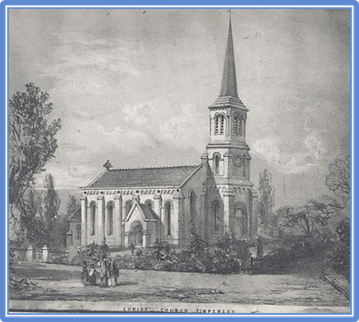 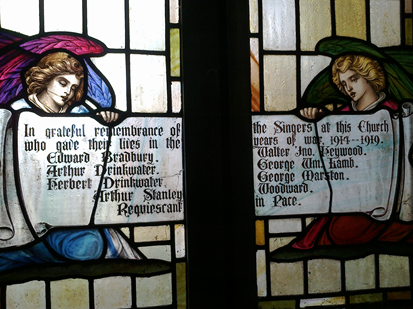 The choir window
‘Faith’, the last window on the south side behind the stairs, is different in style with muted colours and mainly green but beautiful with summer sun streaming through. Dedicated in 1908 and in memory of Hattie Bell, this is the first window you see from the main door.
The final stained glass window, which is slightly out of character with the other five, represents the figure of Gabriel and is of a much later date – 1936. Hence it has lost some of the pure Arts and Crafts style of design. The colour is not as pure and probably relies more on chemical colour rather than natural. It commemorates Anthony F. Obegi and his wife. The designer is unknown
Electric lighting replaced gas in 1920. The Organ Chamber was extended in 1923 as the existing one was too small and damp. The organ was rebuilt with the introduction of ‘a mechanical apparatus’ for blowing the instrument. In 1933 the existing communion rails were removed and replaced by new oak rails with a memorial inscription to William Bell who was the Parish Clerk for the township / civil parish of Timperley.
The 60's and 70's...
The electric lighting was rewired in 1960 with new lighting  pendants and shades fitted. The church underwent internal redecoration during which the wording over the chancel arch was painted over. Further major changes were made later in the 1960s. The carved oak choir stalls were removed and replaced with others of a plainer design that did not match the style of the church. These were intended to be placed in the south transept that is now the Lady Chapel, but were later transferred to the chancel. During the reorganisation, the front pews in the nave were taken out to open up the chancel but this failed to have the desired effect with sad results for the church. 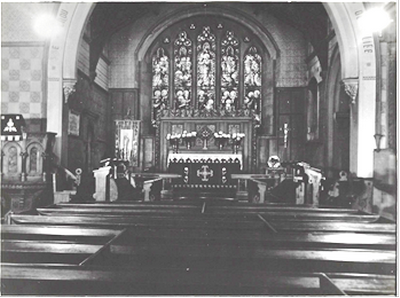 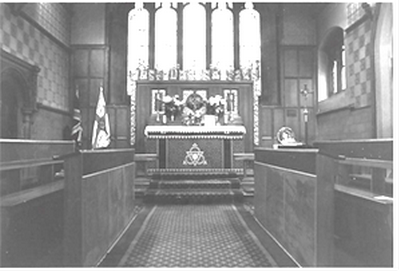 The 1960s replacements.
During 1976 and 1977 the south transept was converted into a Lady Chapel and furnished appropriately through donations. The initiative was largely that of former Lt-Col Ronald Lydiatt, one of the Churchwardens at the time, who did much of the work personally. An altar was given by Eric Matthews (former Churchwarden, Chairman of the Trustees of the Benefice and long-term member of the choir) in memory of his wife Marjorie. 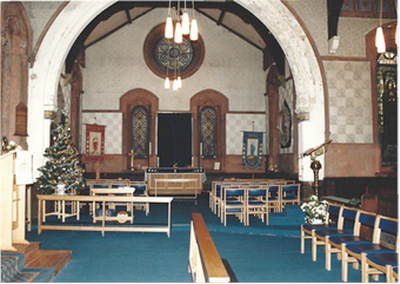 The Lady Chapel
Major Restoration Work...
In 1982 the Quinquennial Inspection revealed very serious and unexpected problems with the building. On the advice of the architects who carried out the inspection, the PCC agreed that a substantial phased restoration programme should be undertaken.
Following a Report for Listing by Debbie Robb which concentrated on the Arts and Crafts features within the building, Christ Church was registered as a Grade 2 Listed Building in 1985.
For a variety of reasons, Christ Church Fund was not launched until 1986 and Phases 1 and 2 (the roof repair and ceiling replacement) did not begin until 1988. They were completed in 1990. Phase 3 saw the repair of the vestry and the outside of the building, together with repairs to the windows and an overhaul of the heating system. Following a number of burglaries a complete security alarm system was installed. It was during the completion of Phase 3 that the spire was found to be dangerous and had to be taken down. The initial appeal for £100,000 was passed and grants were received from Trafford MBC amounting to £27,281. The first three phases cost £131,192. Fairhursts Design Group were the architects. The main contractors for the first phase were W. Fearley & Sons and for the second and third phases Ashwood Ltd (Rochdale).
Phase 4 related to the internal reordering and redecoration of the church which began in July 1997 and was completed on 30th October. The unfortunate effect caused by the removal of pews in the 1960s was transformed by some first class joinery, including new choir stalls, communion rails and storage cupboards. The platform at the front of the chancel was extended, the church redecorated and carpeted to a new colour scheme and the lighting replaced and improved. A group of ladies from the parish made new kneelers for the pews completing a transformation of the interior into a brighter more welcoming place.
The ultimate cost was greatly in excess of £100,000 which was  Funded by what remained in the Restoration Fund, the Coombs and Dobson Bequests and the John Cocker Bequest. Later, a new public address system was installed with the clergy using radio microphones and the organ was cleaned and repaired by Anthony Herrod. 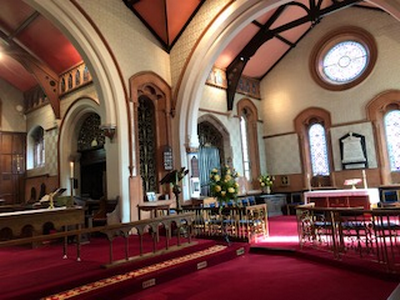 The new colour scheme.
The Tower and Spire...
The tower had previously been ‘reconstructed’ in 1935. A tablet recording this was placed at the back of the church (now in the St. David’s Room) as a memorial to Frederick Alfred Tomlinson, the late owner of Timperley Hall.  (This was probably 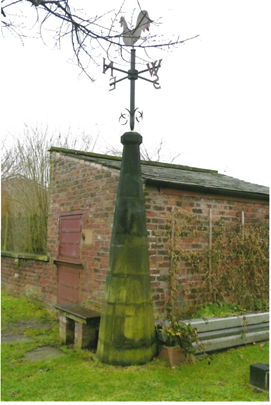 when the base of the spire was strengthened with metal rings.)
Unexpectedly during the work on Phase 3, the spire was found to be in a dangerous condition and had to be taken down. The replacement of this became Phase 5 of the restoration and proved to be problematic due to the church’s status as a Listed Building. The problem related to the method of supporting the spire internally and finding a solution that not only involved the PCC and architect but also the Diocesan Advisory Committee, Trafford Council and English Heritage.
After years of discussions and disagreements between the conservationists, consultees and architects the cost of replacing the spire was prohibitive and so an alternative solution had to be found. This resulted in a saddleback roof replacing the original spire which was completed in December 2004. The top section of the old spire now stands by the hut in the churchyard.
The 150th Anniversary...
The 150th Anniversary of the first service held at Christ Church was celebrated on the 20th of September 1999 when His Grace the Archbishop of York, The Most Revd. and Rt. Hon. David Hope, was the celebrant and preacher at a Sung Eucharist. A celebratory meal was also held at The Woodlands Park Hotel, Wellington Road, Timperley with the Bishop of Chester (Right Revd. Peter Forster) and his wife as principal guests.
The 2000's...
From March 2002 the congregation at St. David’s Church in Hale, a daughter church of the parish, joined with the congregation of Christ Church following the closure of their building.
The final stage of refurbishment was completed in 2006 when pews beneath the gallery were removed and the floor levelled. A meeting room and kitchen were created with glazed folding doors opening onto the main church. Toilets were installed in the base of the tower and access to the gallery created from inside the church with an oak staircase. To open up the space at the back of church, the font was relocated to the corner of the north transept.  The room was dedicated on Advent Sunday 2006 and named the St. David’s Room. 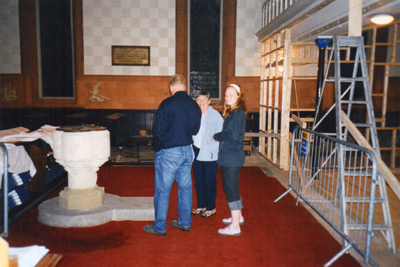 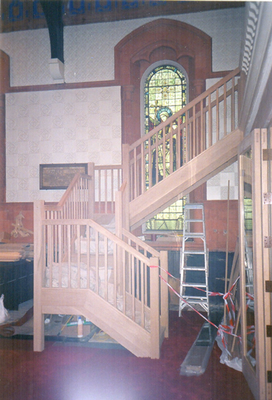 New inside staircase
up to the balcony - 2005
In March 2008 renovation work began on the organ. It was completely dismantled with the majority of the parts transported to the workshops of David Wells, organ builder in Liverpool. The rest was stored in the Lady Chapel. Refurbishment was completed for the July.
In 2015 the floor in the St. David’s Room was found to be rotten and had to be replaced. 2017-18 saw the repointing of the outside walls of the transepts and chancel with eroded stones being replaced and in 2019 the crumbling plasterwork on the transept arches was replaced and painted.
The Churchyard...
The first two burials took place in 1855. In 1905 the churchyard was extended on the Thorley Lane side when a plot of land was sold by John Arnold (auctioneer) to the Ecclesiastical Commissioners for £275. This was consecrated on 15th June 1907.
The churchyard contains the Timperley War Memorial where an act of remembrance takes place each year and wreaths are laid from the Mayor of Trafford and the Vicar, Churchwardens and people of the parish of Timperley. The memorial consists of a cross on a plinth, was designed by John Cocker senior, and paid for by subscriptions from the whole population of Timperley. There are also 14 War Graves – 11 from WW1 and 3 from WW2. The 11 First World War Graves mostly commemorate men who died of wounds while being treated at local Red Cross Hospitals. There are 42 other memorials on family gravestones naming fathers, husbands and sons who died during the wars of the 20th century.
In the 1980s, a number of headstones were laid flat as some were unsafe but also to make cutting the grass easier and more effective. It is a constant, all year round task of grass cutting, weeding, clearing up tree debris, pruning and removing dead flowers. The walls of the building need to be kept clear of vegetation which is a source of damp. A contractor cuts a large part of the grass regularly and we rely on a small group of volunteers for the rest of the work. The trees surrounding the church are regularly monitored. All the mature trees have TPOs (tree preservation order), so permission must be gained from Trafford Council and sometimes the Diocese before any work can be carried out on them.
We aim to provide a place of quiet, reflection and remembrance in our churchyard while preserving an important record of the social history of the area.
Many faithful people have worshipped at Christ Church for over 170 years. They have preserved the building and supported the parish and it’s community with their time, talents and generous giving.
Hopefully this building will continue to welcome and be of service to people of all ages for years to come.
Back to content