Go to content
Parish History...
As the population of Timperley grew around the 1840s with business and professional people from Manchester taking up residence, there became a need for a more local Anglican place of worship instead of travelling to Bowdon. So in May 1847 a meeting was held to inaugurate a movement for the building of a church and vicarage in Timperley. A Building Committee was formed and money began to be raised. On the 13th November 1848 a foundation stone was laid by the vicar of Bowdon and the first Trustees of the Patronage were appointed:

The Trustees appointed the Rev Edward Dowling, who was the officiating minister at the Infant School in Albert Street, Altrincham, as vicar.
In 1849 a Licence for Divine Service was given for 1 year and the first service held on 20th Sept. The licence was renewed on the 14th Sept 1850 and again on the 13th Sept 1851. The church accommodated 497 people with 130 free places. ‘Pew rents’ were introduced for the other places as a means of raising money for building maintenance. The vicarage was built by May of 1851 on land bought on the west side of Thorley Lane and Christ Church was consecrated on 23rd October. The Parish boundary was set and the Ecclesiastical District of Timperley was created under the name of Christ Church on 7th May 1852. This included parts of Timperley, Baguley and Hale. 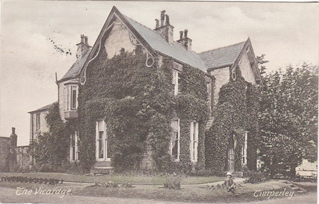 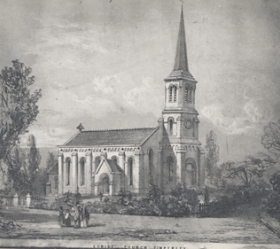 Christ Church 1849
1855 – 56 a new National School was built on Thorley Lane between the vicarage and church, on a site given by Lord Stamford. It was opened on the 4th Feb 1856, cost £1000 and had space for 250 pupils with 80 enrolled at it’s opening. The architect was Richard Lane of Manchester and the Head: Miss Betsy Ann Kingsnorth. Alterations were then made to the Charity School on Stockport Road.
By February 1864 Christ Church was too small for the increasing population and so plans were made to enlarge it by 300 seats making a capacity of about 800. St John the Divine Church, Brooklands was built in 1867 and part of Timperley Parish in Baguley on the north side of Stockport Road was given to the new church on June 15th1868. Part of the Altrincham end of Timperley Parish had been transferred to the new church of St John’s, Altrincham earlier in November 1867. 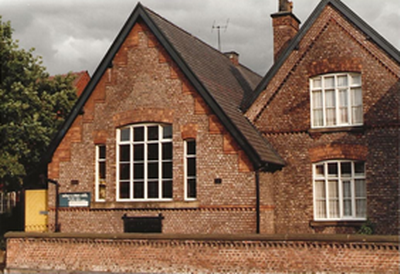 Two sites were secured for two schools in 1872, one on Stockport Road and one on Deansgate Lane. Subscriptions were raised and a Government grant applied for but there was only enough money for one school so the Central Infant School was built on Stockport Road, Timperley in 1873 for 150 children. This was opened on the 12th May with Miss Frances Cubbin from the old charity school as head. The old school was then sold and converted into two cottages called Thompsonville. 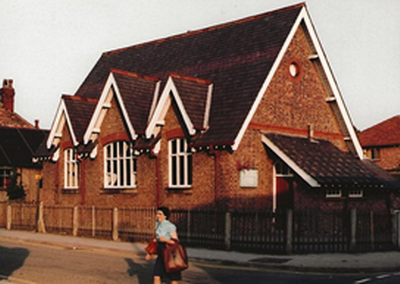 The building of St Andrew’s day school and mission room began in 1882 on the corner of Deansgate Lane and St Andrew’s Avenue on land purchased in 1873. Cost of the site, building and furnishing was £937-3-10d. The school opened on 8th Oct 1883 with Miss Emma Elizabeth Houlson as Head.
Probably the same year, a Christian Young Men’s Institute or Association was established in Back Lane, now Grove Lane. This was a wooden building erected on land leased from James Henry Cade of Levenshulme. St Andrew’s Mission School was licensed for services in 1885 and this continued until 1932. On the 7th May 1886, the Most Rev W. Stubbs, Bishop of Chester, confirmed 40 parishioners.
On the 15th April 1896 a Church Finance Council was formed, followed by a Church Council on the 17th May 1898 or 1899 and a branch of the Mothers’ Union began in Timperley in 1897.
The 50th ANNIVERSARY of Christ Church in September 1899 was marked by special services, the opening of a new organ and a public tea in the schoolroom. Mr J. Kendrick Pyne, organist of Manchester Cathedral, gave a recital.
The twentieth century brought further developments to the parish with more 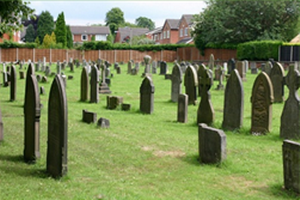 provision for the wellbeing of the community. A plot of land was bought some time after 1905 to extend the graveyard at a cost of £481 6s 11d and was consecrated by the Right Rev Bishop Jayne on June 15th 1907.
The site next to the infant’s school on Stockport Road was given by T.E. Brooks Esq. for the building of the Timperley Parish Rooms and Club, which were completed in 1910. He also leased an acre behind for a bowling green and tennis courts. The total cost, including furnishing was about £2000. After receiving substantial donations, an opening bazaar was 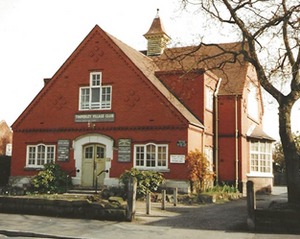 held to raise further funds and pay off the debt. The Club was formally opened by the Bishop of Chester in Feb 1911. After a successful 2 years in use, £593 9s 3d was still needed to clear the debt so another Bazaar was held. The Vicar of Timperley Parish continues to be Chairperson of the committee today. 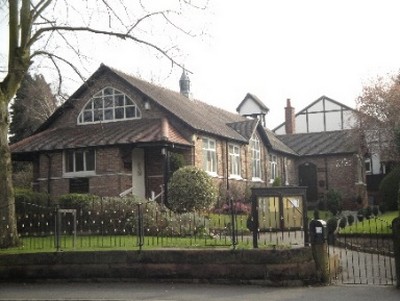 As Timperley continued to grow, a site was offered to the vicar for a permanent church in the Hermitage district of Hale. An appeal was launched and gifts of furnishings made. St David’s Church was built and dedicated in August 1914.
In May of 1919, a public meeting of parishioners resolved that a cross 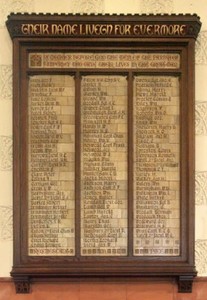 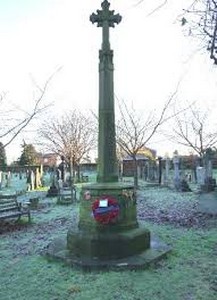 be erected in the churchyard and tablets in the church recording the names of all the men from Timperley who laid down their lives in the war. It is estimated that 300 men went to war from the parish and 80 laid down their lives. A faculty was granted for these war memorials in 1920 and the cost met by subscriptions from the whole population.
An act of remembrance is still held at the Churchyard Cross every year on Remembrance Sunday. There are also 14 war graves in the churchyard (11 from WW1 and 3 from WW2) and 42 memorials to soldiers written on family gravestones. The war graves are not of local Timperley men but of those who were taken to Baguley Sanatorium (now Wythenshawe Hospital) or local Red Cross hospitals after being brought back to England injured.
War Graves in Christ Church, Timperley Churchyard... 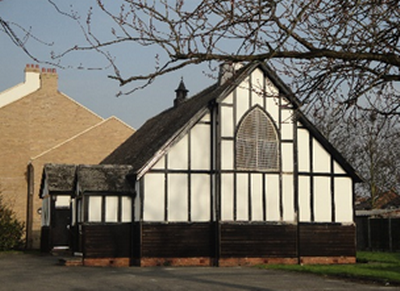 In the 1920s an iron hut was erected on the site of St Andrew’s Day School as a social club for parishioners. This was sold in 1986 and houses built in 1987.
St Andrew’s Church was built on Brook Lane in 1929 and dedicated on November 30th by the Bishop of Chester.
The remaining part of Baguley was transferred from Timperley parish to St John the Divine, Brooklands on May 18th 1934. 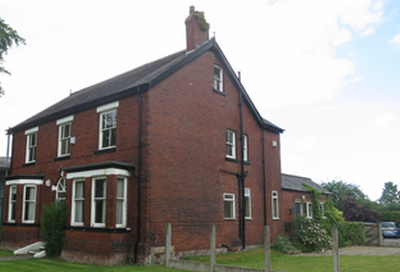 Brookfield house, 97 Park Road was bought by the Diocese in 1937 with the intention of building a hall but the war intervened. It was used for a variety of purposes until plans were put forward for a dual purpose building in 1966. The PCC took over responsibility for the house in 1945. In 1958 it was let to the Conservative Club for 15years but the walled kitchen garden (where the church hall is now) was only leased for 1 year.
The CENTENARY CELEBRATIONS of Christ Church, 18th – 25th September 1949  consisted of a week of special services for all ages ending with a Festal Evensong. There was also a dance at Stamford Hall, Altrincham and a Centenary Social in the Parish Room. 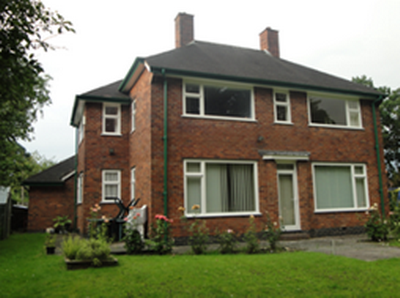 Thorley Lane School closed in 1960 and was later demolished in 1962 to make way for the church hall.
A new Christ Church vicarage was built next to the old one on Thorley Lane in 1963. 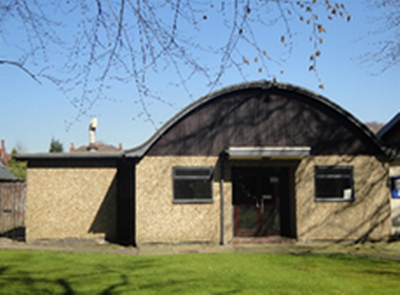 St Catherine’s Church, built on Park Road in 1968 and dedicated on 31st March 1969, was a prefabricated dual-purpose building. Brookfield House became known as St Catherine’s House and was converted into 2 flats for Curates, an office and a meeting room called the Advent Room.
In 1972, land behind the vicarage on Thorley Lane was sold for houses to be built, now known as Larkhill Close. Later in 1975 St David’s church was licensed for weddings.
St Andrew’s School and the Infant School on Stockport Road were both closed in 1981. After the sale of the infant school some years later, the Timperley Education Foundation was set up in 1988 to oversee the application of the money to educational uses.
The Quinquennial Inspection of Christ Church in 1982 revealed problems which led to major work being planned for restoration and modernisation in 5 phases. Christ Church was registered as a Grade 2 Listed Building in 1985 and a Restoration Fund was launched in 1986.
St Catharine’s House was converted back to a single house for the Curate and his family in 1985.
The 150th Anniversary of Christ Church on 18th-19th of September 1999 was celebrated with an Anniversary Dinner held at the Woodlands Park Hotel, Wellington Road, Timperley (principal guests the Right Revd Dr Peter Forster, Bishop of Chester, and his wife) and with a Sung Eucharist at Christ Church (Celebrant and preacher His Grace the Archbishop of York, the Most Revd. and Rt. Hon. David Hope).
A review of the finances of the parish at this time, it’s buildings and ministry led to VISION 2000.
Falling congregation numbers, increased costs and 7 buildings to maintain across the parish would not be sustainable in the long term so a programme of building closures and their sale to fund improvements and modernisation began, creating a more effective parish and ministry. 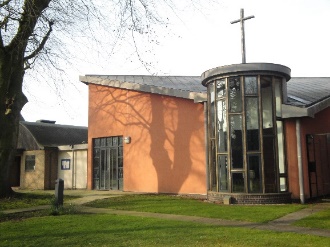 2001 - Holy Cross
The parish of Christ Church, Timperley has changed over the years from being an agricultural / market garden area, to being a large residential parish and in 2011 the Diocese proposed a neatening up of the boundaries on the southern edge of the green belt by moving some narrow ribbons of housing into the parishes of St George, Altrincham; St Peter, Hale and Hale Barns with Ringway. This came into effect in December 2013. Prior to 2012 an area of the Wellgreen had also been moved into the parish of Hale Barns with Ringway.
Back to content